Adding rows or columns of numbers is one of the most common operations performed in spreadsheet programs such as OpenOffice Calc. To make this task easier, Calc includes a built-in formula called the SUM function. 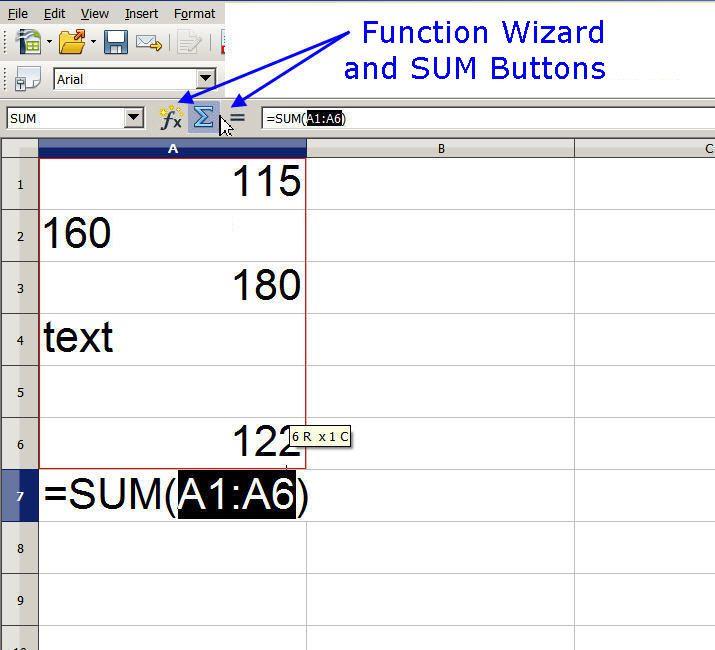 There are two ways to enter this function:

Benefits of Shortcuts and Dialogs

The advantage of using the Sigma button to enter a function is that it is quick and easy to use. If the data to be added is grouped in a continuous range, the function will often select the range for you.

The advantage of using the SUM function dialog box is that the data to be summed is spread over multiple non-adjacent cells. Using a dialog box in this situation makes it easier to add individual cells to a function.

Syntax and arguments of the SUM function

Function syntax refers to the layout of the function and includes the function name, parentheses, and arguments.

Syntax for the SUM function:

number 1; number 2; … number 30 – data summarized by the function. Arguments may include:

Remark : You can add up to 30 songs with this function.

What the SUM function ignores

The function ignores blank cells and text data in the selected range, including numbers formatted as text.

By default, text data in Calc is left aligned in a cell – as you can see from the number 160 in cell A2 in the image above – numeric data is right aligned by default.

If such text data is later converted to numeric data, or if numbers are added to empty cells in a range, the SUM function’s total value is automatically updated with the new data.

Manual entry of the SUM function

Another way to enter a function is to enter it into a worksheet cell. If the cell references for the range of data to be summarized are known, the function can easily be entered manually. For the example in the image above, type

to cell A7 and press the key Enter on the keyboard results in the same result as the steps below for using the SUM hotkey.

Add data with the SUM button

For those who prefer a mouse over a keyboard, the SUM button is a quick and easy way to enter the SUM function.

When entered this way, the function tries to determine the range of cells to sum based on the surrounding data and automatically enters the most likely range as argument number functions.

The function only searches for numeric data in the columns above or in the rows to the left of the active cell and ignores text data and empty cells.

Below are the steps used to enter the SUM function in cell A7, as shown in the image above. 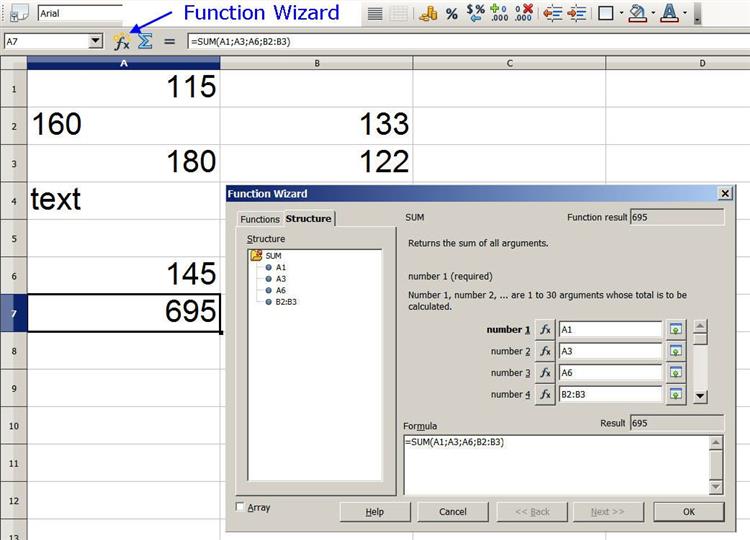 As mentioned before, another option to enter the SUM function is to use the function’s dialog box, which can be opened in one of the following ways:

Benefits of the dialog box

The benefits of using a dialog box include:

Below are the steps used to enter the SUM function in cell A7, as shown in the image above. The instructions use the SUM Function dialog box to enter the values ​​in cells A1, A3, A6, B2, and B3 as numeric arguments to the function.