The trigonometric functions – sine, cosine and tangent – are based on a right triangle (a triangle with an angle equal to 90 degrees).

In math class, these trigonometric functions are found using different trigonometric ratios that compare the lengths of adjacent and opposite sides of a triangle to the length of the hypotenuse or to each other.

In Google spreadsheets, these trigger functions can be found using the SIN, COS and TAN functions for angles measured at radians † 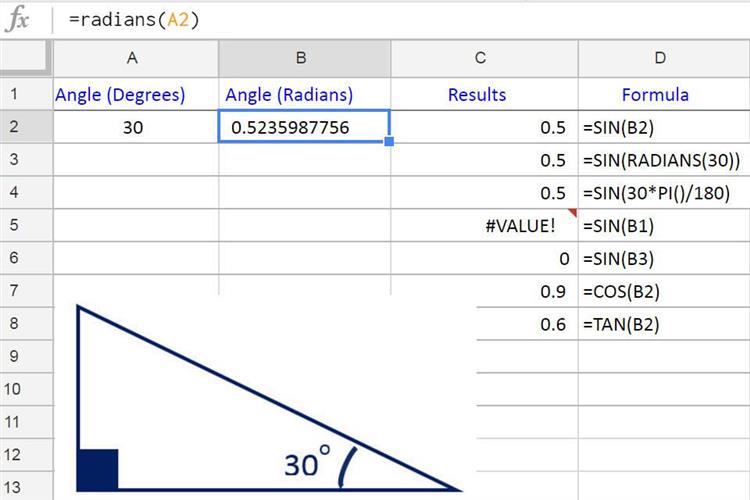 Using the above trigonometric functions in Google Sheets may be easier than doing it manually, but as mentioned, it’s important to understand that when using these functions, the angle must be measured in radians not in degrees is a unit that most of us are not familiar with.

Radians are related to the radius of a circle, where one radian is approximately equal to 57 degrees.

To make working with trigger functions easier, use the Google Sheets function RADIANS to convert the measured angle from degrees to radians, as shown in cell B2 in the image above, where an angle of 30 degrees is converted to 0.5235987756 radians.

Other options for converting degrees to radians include:

Function syntax refers to the layout of the function and includes the function name, parentheses, and arguments.

Syntax for the SIN function:

Syntax for COS function:

The syntax for the TAN function is:

angle – calculated angle – measured in radians
– for this argument you can enter the size of the angle in radians, or alternatively a cell reference to the location of this data in the worksheet.

This example covers the steps used to enter the SIN function in cell C2 in the image above to find the sine of a 30-degree angle or 0.5235987756 radians.

The same steps can be used to calculate the cosine and tangent of an angle, as shown in lines 11 and 12 in the image above.

Google Sheets doesn’t use the function argument dialog boxes found in Excel. Instead it has a field automatic offer The that appears when the function name is entered in a cell.

As you can see in the image above, the argument for the SIN function is entered after the opening parenthesis.

SIN function displays error #WHERE THE! if the reference used as the function argument refers to a cell that contains text. In the fifth line of the above example, you can see this when the cell reference used refers to a text label: Angle (radians).

If the cell points to an empty cell, the function returns null (see line six above). Google Sheets’ trigon functions interpret empty cells as zero and the sine of zero radians is zero.