In this tutorial, you will learn how to easily create an 8-column chart in Excel. You’ll learn how to start with an Excel worksheet filled with data and end up with a bar chart that displays the same information in an easy-to-understand format. 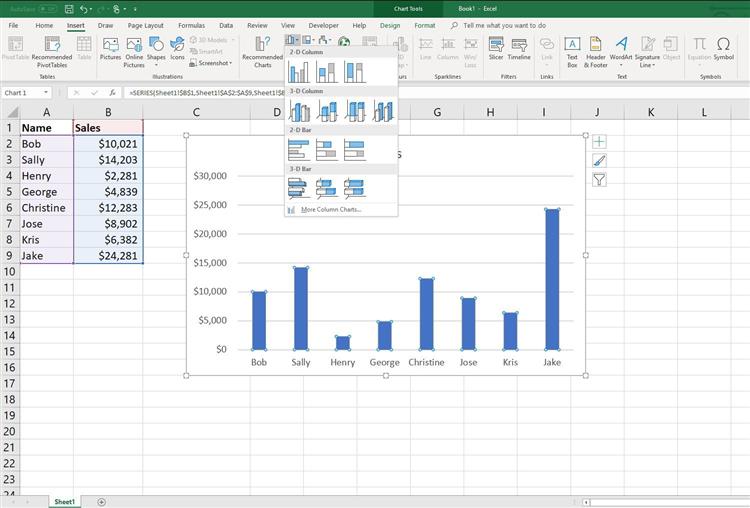 The only data you need in an Excel sheet to create an 8 column chart is two columns containing 8 data points. An example of this is a list of 8 sales employees and the corresponding sales totals for the current year.

Create a chart with 8 columns

To create a chart of sales totals by name, first select the cells from both columns that contain data (including headers) and follow these steps.

This will insert a 2D column chart with 8 columns into your worksheet. Select the chart and drag the sizing handles to resize the chart. Or drag the chart to move it to another location on the worksheet.

The Chart Wizard has been removed from Excel since version 2007. This has been replaced by the chart options on the ribbon as described above. Although the column icons look slightly different in Excel 2013 and Excel 2016 (in 2013, the icons appear in grayscale), the above procedure works the same way. 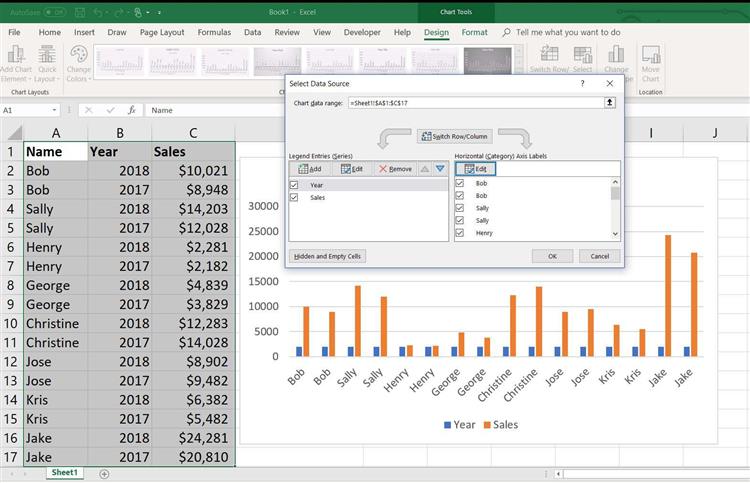 If you have multiple data columns, such as the year of sales and the dollar value of sales shown in the example above, you can change the column that represents each data series.

In the “Select data source” dialog box, you can change how this panel displays the data in your worksheet in many ways.

You can change the appearance of a bar chart by setting numeric formatting for the axis values, changing the chart title, or changing the colors of the bars.

The procedure for creating a bar chart in Excel 2010 is similar to later versions, but there are some minor differences.

You start with the same two data columns containing 8 sets of data. Select both columns (including headings).

This will insert a 2D column chart with 8 columns into your worksheet.

When formatting your worksheet, list the names that describe the data in one column and to the right of that the data itself. If there is more than one data series, list them one at a time in columns with a heading for each data series at the top (title).

You can change the appearance of a bar chart in Excel 2010 by following the same steps as in Excel 2019, 2016, or 2013, but changing the color of bars in a chart is slightly different.

To learn more advanced methods for inserting and formatting charts and charts in Excel 2010, read the Excel 2010/2007 Bar/Chart Tutorial.