Indesign CC is a subscription application for print and digital layout

Adobe InDesign CC is a professional page layout application used by many commercial offset printing companies. This is a must have app for graphic designers, especially those who work with print media. It’s the gold standard in software publishing, an area once dominated by QuarkXPress and the discontinued Adobe PageMaker. However, InDesign CC isn’t just for printing. Current versions include features to create documents for online and tablet viewing.

Adobe InDesign CC is available as a monthly or annual subscription to Adobe Creative Cloud, either as a standalone application or bundled with other Adobe CC applications and services. Free trial available.

InDesign can be installed on multiple computers and you can log in on two computers (such as a desktop and laptop), but you can only use the application on one computer at a time. Adobe no longer produces boxed versions of the software. InDesign CS6 was the last version in a box.

Adobe updates its apps regularly and all updates are readily available to anyone with a subscription.

Since InDesign is installed on your computer, you do not need an internet connection to use it.

InDesign offers extensive typography and color options, combining graphics, vector graphics, charts, PDFs, text, and decorative elements in one place to create a complete digital file for printing or use on the web.

With so many features and capabilities, InDesign presents a significant learning curve for graphic artists and engineers who have never used it. Search the web for InDesign CC tutorials for help. 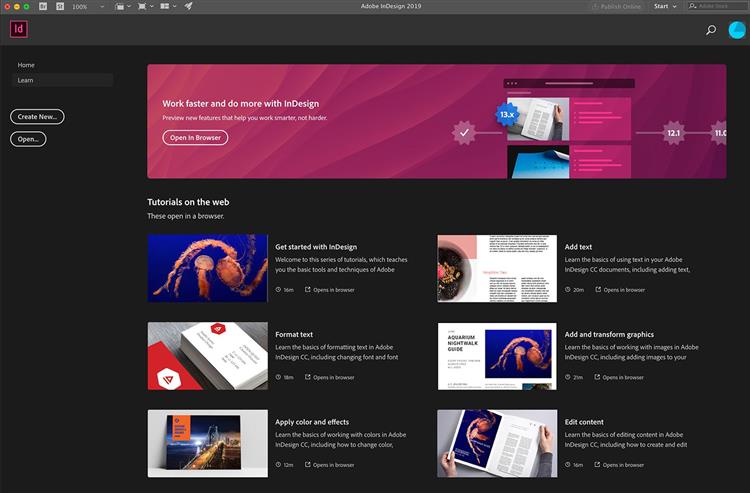 The app comes with several tutorials. Go to the Learning section on the home screen to find these tutorials. The instructional videos cover topics such as:

The Adobe website has a library of InDesign-specific video tutorials, sorted for beginners and advanced. Once you’ve learned the basics, you can play around with the app to learn more about InDesign’s advanced features.

InDesign also supports formats for creating eBooks, digital magazines, and other content for viewing on tablet computers. In addition, InDesign CC includes collaboration tools so that users can work with authors and editors of publications at the same time.

The main features of Adobe InDesign CC include:

Where originally everything revolved around print design, InDesign has expanded with new technologies. InDesign provides interactive features for on-screen documents.

Select Digital publishing in the workspace switcher next to the Publish Online button at the top of the screen. Add hyperlinks, buttons, forms, animations, audio and video to your document using the Digital Publishing Workspace.

When you’re ready, choose Publish online at the top of the screen and fill in the document specifications and viewer permissions. 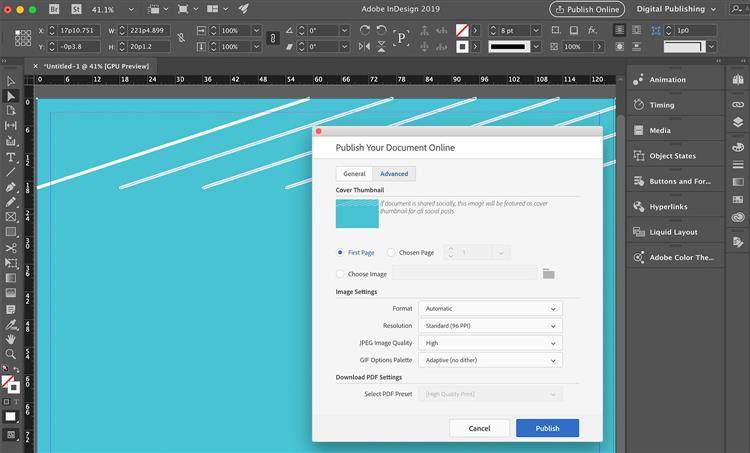 The digital version of the document works in any modern web browser and on any device Publish directly from InDesign and manage published documents in the program.