The main use of the Excel MAX function is to find the largest value in a set. However, it can also be used to search for other values. Learn more about this feature and find a shortcut to use the MAX feature. 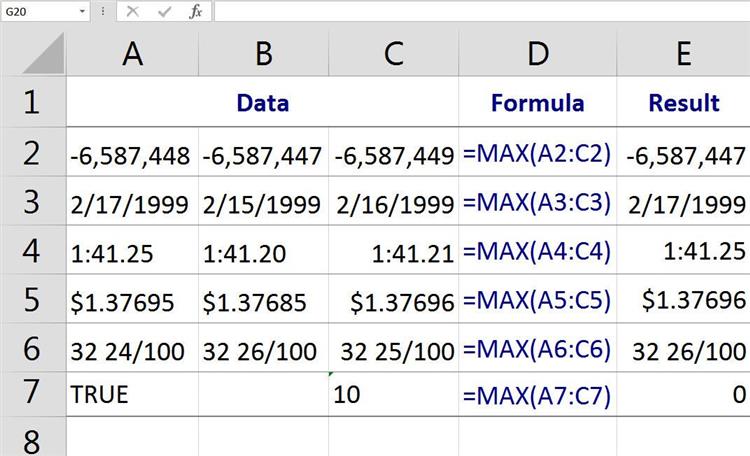 The MAX function always finds the largest or maximum number in a list of values, but depending on the data and how the data is formatted, it can also be used to search:

And while it is often easy to pick the largest value from a small sample of integers, the task becomes much more difficult for large amounts of data, or if the data turns out to be:

Examples of such numbers are shown in the image above, and while the MAX function itself does not change, its versatility in working with numbers in different formats is apparent and is one of the reasons this function is so useful.

Syntax and arguments of the MAX function

The syntax for the MAX function is:

Arguments in parentheses can be:

If the arguments do not contain numbers, the function returns null.

If the array, named range, or cell reference used in the argument contains empty cells, booleans, or text data, those cells are ignored by the function, as shown in the example on line 7 in the image above.

Row 7 has the number 10 in cell C7 formatted as text (note the green triangle in the top left corner of the cell, which indicates that the number was stored as text).

As a result, along with the boolean value (TRUE) in cell A7 and the empty cell B7, it is ignored by the function.

As a result, the function in cell E7 returns zero for the answer because the range from A7 to C7 contains no numbers.

Here’s how to enter the MAX function in cell E2 in the sample image at the top of this page. As shown, the range of cell references is included as the number argument for the function.

An advantage of using cell references or a named range over direct data entry is that if the data in the range changes, the function’s results are automatically updated without editing the formula itself.

Options for entering formulas include:

This shortcut for using the MAX function in Excel is one of many popular Excel functions whose shortcuts are grouped under the AutoSum icon on the Home tab of the Ribbon.

To use this shortcut to access the MAX function:

Answer -6,587,447 appears in cell E2 because it is the largest negative number in that row.

When you click cell E2, the full function =MAX(A2:C2) appears in the formula bar above the worksheet.