Find out which emojis are most used

Emoji really is its own language these days. While emojis are especially popular in texting and social media sharing, you can now even find games, apps, social networks, and books based solely on the emoji trend.

There are many different emojis to spice up your polite messages, but only a handful of them are really approved by the masses. Can you guess which ones they are?

To see which are the most popular, at least on Twitter, you can check out EmojiTracker, a tool that tracks emoji usage on Twitter in real time. 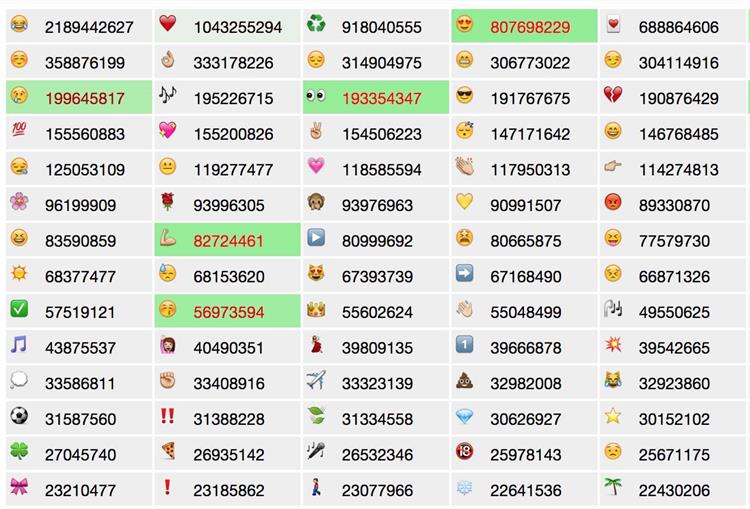 While the exact ratings can change very often, the most popular emojis right now are:

Each of the red/pink hearts, the face with tears of joy, and the smiling face with heart-shaped eyes almost always dominate the highlights. This may change over time, especially as additional emoji are introduced and used by more platforms across the web.

Go ahead and check where these rankings are in real time by visiting EmojiTracker for yourself. Please note that this tracker does not contain all the emoji used on other social networking sites, in text messages and elsewhere on the web except Twitter.

In July 2017, Mark Zuckerberg posted an infographic on Facebook featuring some of the most popular emoji trends on the social media giant in celebration of World Emoji Day.

According to the infographic, the most popular emojis on Facebook are:

Using data collected from 2016, the social marketing platform Curulate found that these are the most popular emojis used on this platform:

Most popular emojis by country (2015)

A slightly older study by SwiftKey revealed other ways to use emoji. Using over a billion pieces of data in various categories, some of the most popular emoji used in specific countries have been identified.

Happy faces emoji make up about 44 percent of the total used, followed by sad faces at 14 percent, hearts at 13 percent, hand gestures at 5 percent, and the rest at very low percentages. French turned out to be the only language where his main emotion was the heart, not a smiling face.